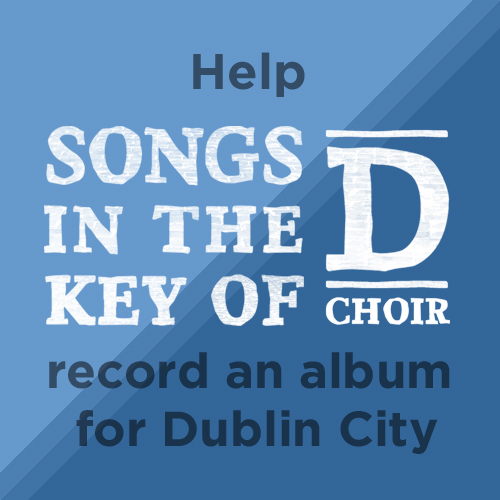 One of our plans for 2015 is to record an album of our unique arrangements of the songs of Dublin City. We are hoping you might be able to help us do that.

We are looking for funding to help us to record some of our incredible arrangements of Dublin classics, and some of the fresh music coming from the city today.

Founded by Eoin Kilkenny as part of the Dublin Fringe Festival in 2013, Songs In The Key of ‘D’ has gone on to grow to a membership of over 70 people from across the city and has performed to sold out crowds in the National Concert Hall.

The choir has a vast repertoire, from Handel to Mozart, and, Lynott to Drew. They perform a special blend of old Dublin stalwarts to some of the best music from contemporary Dublin artists.

It’s important to us that the city reconnects with some of the music that has made the city so special and that it is sung by the people living in it in 2014.

Rewards available to funders include advance copy of our album, copies of arrangement, tickets to an exclusive Christmas concert on Dec 2nd in UCD, and even a chance to sing with the choir!

All members of the choir are volunteers and in order to keep the choir as open to everybody as possible we don’t charge members a fee to join. Therefore, we would really love your support to help us raise the money to record this new album. It is important to us that this unique group has the opportunity to record the songs of their city, and so they can be kept alive through time.

We are aiming to raise over €6,000 to help us cover the cost of rehearsal venues, sound engineers, mics, mastering the tracks, designing the CD case and producing the final CD. The total cost will be over €11,000 and while we hope to raise some money through a fundraising concert and private donations – this Fund it campaign will make the bulk of the album costs. Through your generous funding we can make this album for Dublin City!

A choir with a repertoire made up entirely of songs that are either about Dublin or that have a strong link with Dublin. We sing everything from the Hallelujah Chorus to The Script!