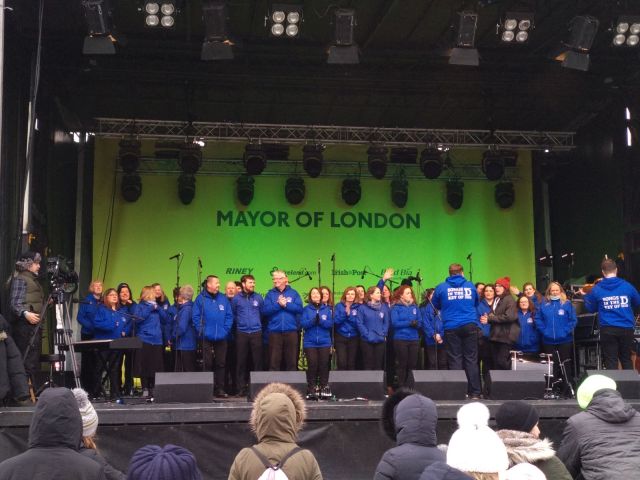 We were thrilled to be asked back to perform in Trafalgar Square for St Patrick’s Festival London 2018. The weekend got off to a flyer of a start with Ireland’s triumphant rugby players completing the Grand Slam in Twickenham. A contingent of the choir also attended Damien Dempsey who performed a superb show in Camden’s Roundhouse.

There were three performances in all for us on the Sunday. First up was our solo slot in Trafalgar, then on to Tottenham Court Road Tube Station for busking and finally back to Trafalgar for the Dolores O’Riordan tribute finale (performing with some seriously talented young women). We raised £75 at the busking, which was donated to the London Irish Centre. We’re hugely grateful to Gary Dunne, Creative Programmer of the festival for the last seven years, who invited us. We can only hope to be back at some point in the future.

A choir with a repertoire made up entirely of songs that are either about Dublin or that have a strong link with Dublin. We sing everything from the Hallelujah Chorus to The Script!